Open-mouthed – The tooth about laughter in art, by Bob Ballard SGFA

Posted on 29 November 2011 by thesocietyofgraphicfineart

In 1859 Henry James undertook a European journey to view the culture of the Continent. According to what he wrote, however, his major preoccupation was constipation.  In 1969 I similarly embarked on a tour of the major galleries of Europe, but my concern was toothache. 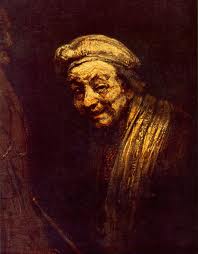 My special destination was the Wallraf-Richarz Museum in Cologne, which houses Rembrandt’s last self-portrait, painted when he was 63. It shows an old, stooped man with the most famous potato nose in history — apart from Oskar Kokoschka’s — turning towards the viewer, his senile mouth dropped open, and laughing mirthlessly in an unbearably poignant manner. Or so it seemed to my young eyes. I wept at this heroic, if half-wrecked, example of human resistance in the presence of imminent death. The artist indomitable to the end!

Or so I thought at the time.

As for my toothache, a second tooth — a canine — had failed to descend (thank goodness it wasn’t a testicle, or the tenor of this piece would be radically different) and had to be surgically assisted. The subsequent discomfort cast in my mind a retrospective memory of Rembrandt’s mouth which has never gone away.

Those decayed ivories of his were only a part of an overall dental catastrophe. The interior was that rich black that isn’t really black in Rembrandt, and the pegs — one could not identify them as teeth — were an oral nightmare. In short, the caries was scary.

Though I couldn’t help but reflect that those yellow, cheesy remnants were the same golden colour as the halo surrounding Rembrandt’s St. Matthew and the Angel, or the shower of glittering coins in his painting of Zeus and Danae. Such is the versatility of pigment in the hands of a master.

I’ve been preoccupied with the history of the laugh in European art ever since.

The Laughing Cavalier by Frans Hals

For a long time it was surprisingly rare, maybe because it is not recorded that Jesus approved of cachinnation, and religious painting had so dominated the centuries thereafter. There have been smiles, of course, like those on archaic Greek statues — which I like to think were induced by Retsina — and naturally we all think of La Giaconda. Why didn’t she show her teeth? Are Mona Lisa’s gnashers as far gone as Rembrandt’s? Or does she conceal a deliquescing Toblerone beneath her palate?

Closer to home there is the Laughing Cavalier in the Wallace Collection, who as we know isn’t laughing at all but smirking because he has just popped back from Selfridge’s on Oxford Street with a bargain – perhaps those soft leather gloves he picked up for a song.

But there are some genuine laughers from Northern Europe, those Flemish and Dutch topers reeking of tobacco smoke in smelly taverns. They are so persuasive you can still inhale the stench of raw Geneva and bloaters on their breath to this day. (While on the subject of stinking fish, it seems that James Ensor’s surname is a play on that favourite Ostend dish, soused herrings. Try saying “hareng sauer” out loud in a nasal voice and you’ll get it eventually. Ensor’s cranially ghoulish figures certainly feature toothy grins if not outright laughter.)

Self Portrait in a Straw Hat by Elisabeth Vigée-Lebrun

One theory is that the smile in Western European art never got beyond that weird half-rictus that characterises Voltaire’s bust by Houdon until improvements in dentistry in the eighteenth century.

Up to then, practitioners were of the rough and ready standard of “Le Grand Jacques” who stood on the Pont Neuf in Paris shouting reassuringly to sufferers, “One tooth out for a sou, and if not, the whole jaw for nowt.”

By the end of the eighteenth century however, enough advances had been made for fashionable women to have portraits of themselves smiling quite openly.

Female artists like Elisabeth Vigée-Lebrun were in the forefront.

Bared teeth had become cosmetically acceptable, so we can therefore state unequivocally that art has been radically change by those humble artisans we can dentists and whom the Australians call fang bandits.

Once the fashion commenced, there was no stopping.

You only have to look at de Kooning’s women to confirm this – his canvases are slashed by flashing gnashers — and of course these days Anna Maria Pacheco uses real human teeth in her sculptures.

The Scream by Edvard Munch

Finally, if you entertain any residual doubt, consider “The Scream”.

It is not a cry of psychic agony at all. Look in that open mouth. Not a tooth in it. Imagine: a munch without teeth.

So forget the existential angst. It was toothache — and Munch’s problems were not mental, but dental.

Editor’s note: Bob Ballard SGFA has been a full-time artist since 1989, when he won a Goldsmiths Travel Bursary to draw and study Romanesque art in Spain, and has received many prizes thereafter, including the Bruckhaus Derringer Award from the Royal Watercolour Society.is an artist based in Bristol. Until recently he was a senior lecturer at the University of the West of England, and nowadays is senior tutor and research associate for COREOX, University of Oxford, as well as an executive member of the Councils for the SGFA and the Bath Society of Artists. “In my work,” he says, “I always try to place the unknown next to the known. Defamiliarisation is the essence of art. The closer you look at it, the greater the distance from which it stares back at you.”  Please visit Bob’s web site at www.bobballardart.com